DivX is a video tool that allows you to play high-quality videos on your computer or Macbook. The applet is developed to playback movies, TV shows and web video clips in such formats as AVI, DIVX, MKV, MP4 and others. DivX for Mac is a toolkit that consists of DivX codec including Pro features, DivX Converter, DivX Web Player and DivX playback support. DivX Player can boast with free HEVC and Ultra HD (4K) playback, streaming video, audio and images to DLNA-compatible devices, allowing to navigate and access various movie scenes with one click, managing playlists, featuring advanced audio functions and many more.

But can it meet the competition of DivX Player alternatives that are snapping at its heels?

One of such DivX Player similar software that gathers speed and wins customers is Elmedia Player. The app is a user-oriented DivX alternative for Mac that allows you to stream video as well as audio from all AirPlay devices and to download online media from different hosting websites.

To understand which tool is better and more advantageous for you let’s compare main features of DivX and Elmedia Player. 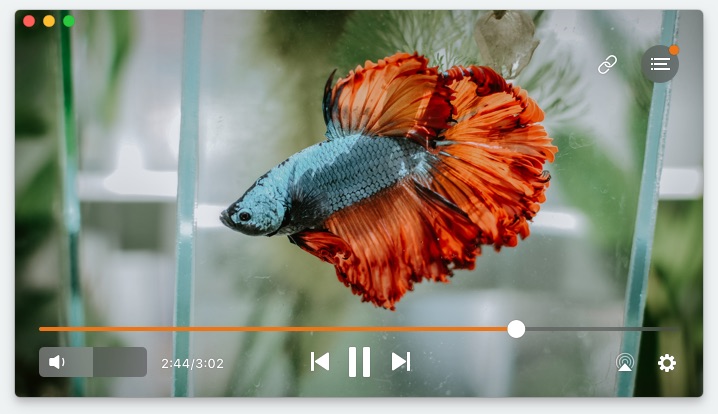 The alternative to DivX Player, Elmedia is famous for its enhanced and user-friendly interface. It puts emphasis on multimedia and doesn’t provide any unnecessary buttons on default that you won’t ever use. Playback settings give you a possibility to control your media files without efforts or pains. Easily play, pause, forward, rewind and many more. DivX is a desktop media player, that is easy to use. Its design is modern and attractive. It’s hard to ignore.

DivX Player and its alternative for Mac support different file formats. Elmedia Player doesn’t require any codec settings or plugins for format recognition. Here you can check out Elmedia supported formats list. DivX Player differs from Elmedia Player a lot. It focuses on DivX playback. You will need DivX codec for Mac as plugin to create and play DivX videos, convert videos to DivX with DivX Converter, burn DivX video discs, etc. DivX supports such formats as AVI, DIVX, MKV, MP4 and others.

Downloads from the Internet 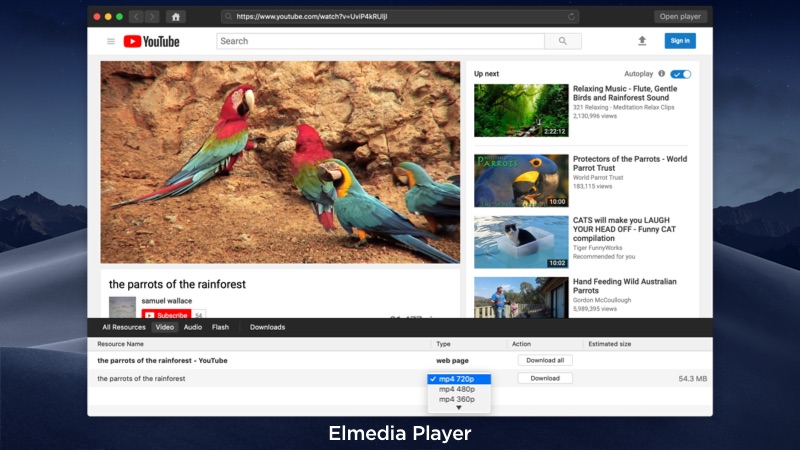 PRO version of the alternative to DivX Player, Elmedia PRO, easily downloads different video formats together with RTMP streams and HTML5 videos. Elmedia Player is great for downloading video files from popular video hosting services such as Vimeo, Metacafe, Facebook Dailymotion, YouTube, Yahoo, etc. DivX Web Player allows you to playback and save DivX movies to view offline. But the official website doesn’t give any answers to the question what video types you can download with DivX Player.

Elmedia Player PRO is beneficial for many reasons. One of them is the A-B Loop function. By using it you can select a part of the video file and play it as many times as you like at different speeds. DivX Loop Playback option is not as good as you would like to. Its work is not steady. 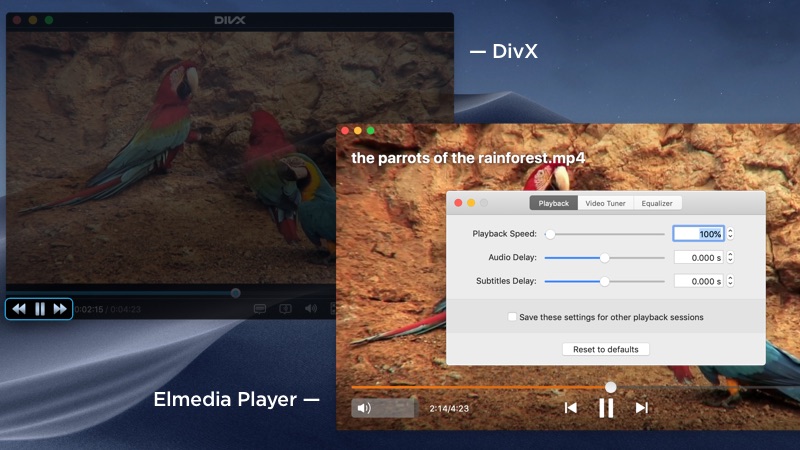 With Elmedia Player you can easily adjust the speed of video playing. To decrease the speed use the commands Playback -> Decrease Speed or press ⌘[. The hotkey or a menu option will help you achieve the desired slow speed or will increase it. DivX does not provide any functions to adjust your playback speed. But you can jump to your favorite episode by using chapter points and Trick Play.

DivX Player alternative for Mac, Elmedia Player PRO, offers you an opportunity to make a screenshot or to convert video files into series of screenshots. Images can be saved in TIFF, PNG, GIF, or JPG. To do this press Playback → Record a Series of Screenshots in the main menu. DivX PRO enables Take snapshot option. But making screencaps is not availablein it. 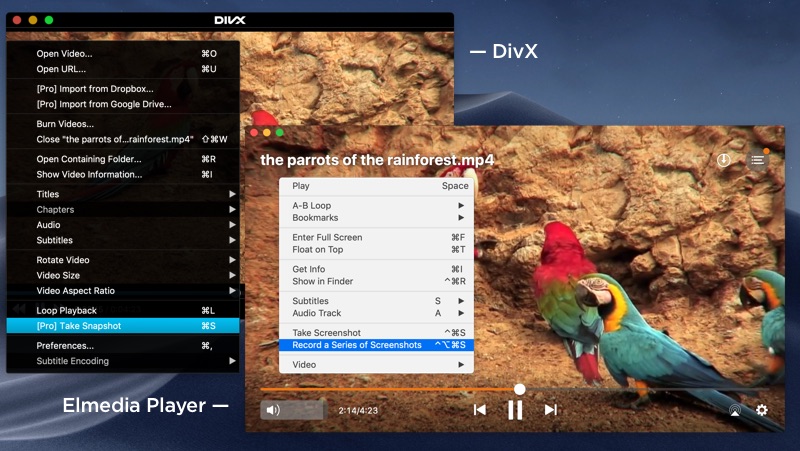 DivX Player alternative for Mac, Elmedia Player PRO, offers you an opportunity to make a screenshot or to convert video files into series of screenshots. Images can be saved in TIFF, PNG, GIF, or JPG. To do this press Playback → Record a Series of Screenshots in the main menu. DivX PRO enables Take snapshot option. But making screencaps is not available

Transmission to Other Devices

DivX Player alternative for Mac, Elmedia Player PRO, can be used as an AirPlay Receiver and AirPlay Sender. It makes it quickly and easy to stream audio and video files in different formats, resolutions, and codecs from any AirPlay device (Mac, iOS and Android) or transmit the content from a Mac with Elmedia Player installed to another Macbook. DivX Media Server is a good tool for streaming videos, music and photos to any DLNA-compatible device, such as PS3, Xbox, Samsung Galaxy, or Chromecast. DivX doesn’t support AirPlay technology.

If you are a big fan of sophisticated settings and options, this function is designed for you. You can enhance your video playback the way you like. Try such exclusive possibilities as flip, rotate, mirror, adjust brightness, contrast, saturation, deinterlace video, equalizer with custom presets, 5.1 surround sound playback support, etc. that are at your full disposal in Elmedia Player. DivX offers basic functions with no opportunity for enhancement. You can use flipping and rotating videos, adjusting video size (normal, half, double), video settings, aspect ratio, etc.

Despite the efficiency and good work users report that DivX Player has some drawbacks. Elmedia Player doesn’t have reports like that. So when you work with DivX Player you may come across the following things: